I've been announcing the Open Beta release of my game HexSolve for Android and iOS.  HexSolve was written in Smalltalk and people have been asking me how it's possible to run Smalltalk on mobile devices.  I thought I'd write up a little description of the technology behind it. 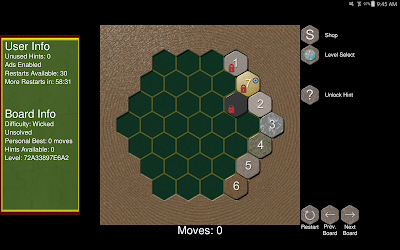 I've wanted to be able to run Smalltalk on Android and iOS for many years.  I finally decided to do something about it.  I chose VisualWorks for my development environment.  Unfortunately iOS doesn't support dynamic compilation so getting the regular VisualWorks VM to run on iOS is virtually impossible.  I decided to skirt around the issue by writing my own VM.

My VM is written in C.  It interprets the same bytecodes as those generated by VisualWorks so I can use the VisualWorks compiler to compile all of the code for the mobile Smalltalk.  Being a pure interpreter, I get around the problem of dynamic compilation on iOS.  Apple is okay with an interpreter so long as all of the code it's interpreting is delivered with the product and not downloaded dynamically.

Development of the Smalltalk code begins in VisualWorks.  I have my own Object class (in my own namespace) as well as my own copies of the other base classes (True, False, UndefinedObject, etc.).  I did this because I had better control of the implementation than I would if I just used the VisualWorks base code.  If I used the regular VisualWorks classes, then I would need to bring in more and more of the base code to get those classes to work.  There are just too many "strings attached" to do this effectively. 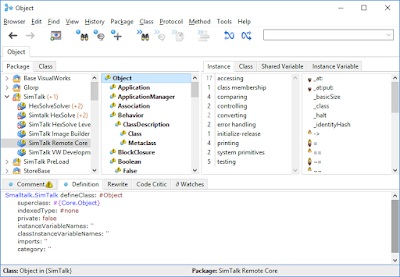 Methods beginning with an underscore ($_) will have the underscore removed when moving the image to the mobile device.  It allows me to have one version for Mobile Smalltalk and a different version for VisualWorks.  You can imagine that it would be bad if I re-defined at:put: in VisualWorks.

I have an ImageBuilder utility that takes all of the code in the packages "SimTalk Remote Core" (base Smalltalk code) and "SimTalk HexSolve" (the game itself), packages them into a special 64-bit image format and writes the image into a file.  I can then use AndroidStudio or XCode to include this image as an asset to deliver to the device along with the interpreter.

The interpreter itself is a 64 bit image.  It uses immediate objects (tagged objects that fit within the object pointer) for SmallInteger, Character and Float.  This allows me to do faster operations on these objects without allocating memory.

The game uses Smalltalk primitives to interface to OpenGL ES which runs on both Android and iOS. For text, I interface to Freetype which is compiled and delivered with the game.  Freetype will create images for the characters which I can collect and cache in a Smalltalk Image object.  I then render these images as OpenGL textures.

My mobile Smalltalk is single-threaded - there's no such thing as fork, a Process or a ProcessManager.  In fact, Smalltalk runs completely as an OS callback.  When the OS determines that something happened (a touch event, a button or a timeout), it runs a callback in my VM.  The VM creates an Event object, drops it into a known spot in the image and runs the interpreter.  The interpreter then reads the event, dispatches it, re-renders the screen if necessary then calls suspend which returns from the OS callback.  Nothing more happens until the next OS callback.

Some people have asked me when I'll release this technology so they can use it.  I'm sorry to say, but I don't intend to do that.  This is for internal use for me to write Smalltalk code for Android and iOS.  I have several problems if I try to commercialize the development technology:

The graphics for HexSolve were all rendered using POV-Ray.

I hope that answers most of your questions.  Happy Smalltalking.